tailwindcss is a highly customizable, low-level CSS framework that gives you all of the building blocks you need to build bespoke designs without any annoying opinionated styles you have to fight to override

What's the difference between tailwindcss and other CSS frameworks?

tailwindcss doesn't have any theme or built-in ready-to-use UI components. Besides, Tailwind is not opinionated, meaning that it provides highly composable, low-level utility classes that make it easy to build unique and fully responsive user interfaces without ever leaving your HTML file.

Why I choose tailwindcss?

I love the process of building my own user interfaces from scratch, but I don't want to deal with the pain that comes from having to write custom CSS, or thinking about what's the best name I can use for each element. With tailwind, you can build complex components in a breeze thanks to features like Pseudo-class variants and responsive utility variants

Ok, this looks amazing but... Can I use it in my Angular projects?

tailwindcss best features are found in the build process, which is conveniently automated using (mostly) postCSS plugins. Unfortunately, Angular CLI currently does not offer developers access to the webpack configuration being used (which is managed by the CLI 'under the hood'), so you're out of luck. Unless you use ng-eject to fully customize your Angular CLI build😖. But wait! if you eject your project, you'll also loose several capabilities provided by Angular CLI, like:

ng-tailwindcss is a CLI tool for integrating tailwindcss into Angular-CLI projects with as little pain as possible. Thanks to this amazing library, you won't need to eject your project.

Now using npm run start for your development server will ensure your tailwind files are being watched and built with your project, and you can still rely on the angular-cli for everything else.

Go to your app.component.html file and paste the following code:

If everything is ok, you should see the following card: 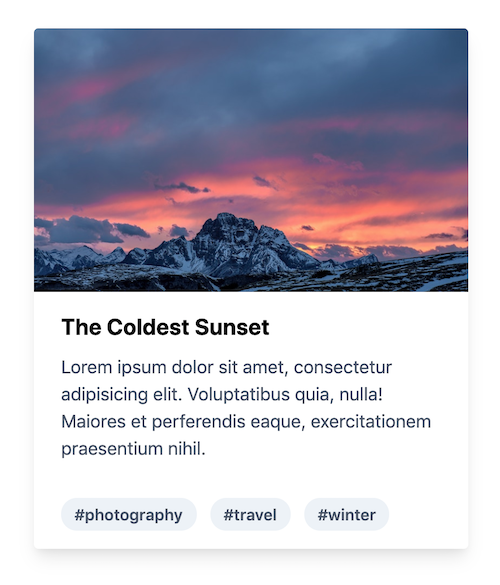 Once you start playing with tailwind, there is no way back. So, please be careful😀